Story and article by Tony Mangia

The world knows New York City as the Big Apple and — in celebration of the 10th anniversary of the first placement of All-Star statues around the host cities — MLB has scattered 35 six-foot tall, 350-pound sculptures shaped as the healthy fruit around NYC in a tribute to the 84th Midsummer Classic.

The commemorative All-Star statues have become a big part of the ASG experience and tourists searching out their favorite team's statue for a photo-op has become a great way for fans to get involved with the annual event and see the host city close up.

This year, the 2013 collection of statues (one for each team and a few add-ons) are on display at various locations in Manhattan with the exception of the one at Citi Field (a Matt Harvey toss from the Mets' iconic Home Run Apple). 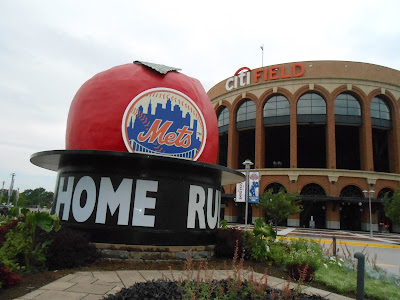 The mostly unassuming apples can be spotted in the shadow of the nearly completed Freedom Tower at the World Financial Center (Rockies), uptown in bustling Harlem (L.A. Dodgers), outside the battle-scarred Intrepid aircraft carrier on the Hudson River (Nationals), blocking the aisles of a Fifth Avenue Tommy Bahama shop (S.F. Giants) and being ignored by young gamers in the Rockefeller Center Nintendo store (Mariners).

I spent three days with my trusty Nikon peddling through rivers of yellow taxis via mountain bike to capture the essence of the soon-to-be-forgotten apples. Did I mention the heat wave?

Along the way, I met a troop of Boy Scouts (Nationals), a protective 150-pound dog (Cardinals), an ASG ticket winner (Tigers), break-dancing street performers (Rangers) and got the opportunity to enjoy parts of the city I haven't seen in years — or just plain forgot about. I even saw Mets and Yankees fans (Athletics) making nice by taking pictures of each other.

If you aren't lucky enough to be visiting New York for the game this week — or just don't want to deal with the subways, the heat or rent a Citi Bike to see the "Apples on Parade" — here's all 35 of the colorful creations in one photo show to see what you're missing.

Check out my portfolio.  Weddings a specialty.
Posted by The Other Paper at 11:30 AM