It may have not been a C-130J Hercules Transport Aircraft that Tim Tebow arrived in yesterday to set off the next round of Tebow-mania but— even after a flight in the cushy seats of a fancy jet— the New York Jets new "backup" quarterback paid his respects to a real hero.

Tebow's wave of a hand as he was whisked away from Morristown Airport revealed that he was sporting a wristband bearing the name of U.S. Marine Cpl. Michael Nicholson— an amputee who lost both legs fighting in Afghanistan last year.

"Oh wow!  really?" Nicholson said after he found out the red wristband bearing his name was on the  newest member of Gang Green.

Tebow had three other wristbands wrapped around his right wrist— the other two honoring causes special to  the religious quarterback. 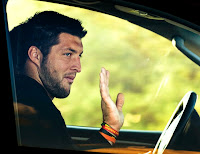 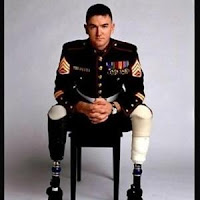 The 22-year-old former-Marine— who lost both legs while on tour of duty last year— had nothing but praise for the quarterback.  Tebow visited the corporal for about an hour after attending the opening of  a Tampa sports complex in which Tebow had invested.

"It was great that he came out and spent some time with me," Nicholson said.  "It meant so much."

Nicholson said they talked about Tebow's glory days at the University of Florida how they both played football for rival high schools around the same time.

THIS IS A HERO
Not a sports player.  Not a politician. Not a faddish figure.
A hero faces death for others, with no thought of personal gain or glory.
This is the face of a true hero.
"The best word to describe Tim Tebow is he is humble," the former- Marine told The New York Post.

I can think of a lot better words to describe Cpl. Michael Nicholson.
Posted by The Other Paper at 1:19 PM