On a rooftop bar in mid-town Manhattan, six-time champ Takeru Kobayashi downed a record 69 hot dogs to become the unofficial winner of this year's annual Nathan's hot dog eating competition—only problem was, he was seven miles west of the actual boardwalk event on Coney Island.

With the Empire State Building as a backdrop and a ten-foot high TV screen showing the actual sanctioned Nathan's Fourth of July Hot Dog Eating Competition in real-time on ESPN, Kobayashi went up against the broadcasted competitors on the big screen and demolished the field via the air waves.

You know the new saying: If you're not allowed to join 'em face-to-face, beat 'em via television simulcast.


Four-time defending champ, Joey Chestnut, ate 62 hot dogs today and won the authentic competition from the Nathan's at Surf and Stillwell Avenues in Brooklyn, but it was Kobayashi who broke Chestnut's two-year old record of 68 and technically ate more hot dogs on this Fourth of July during the same time span.

On this steamy hot morning, about 500 Kobayashi supporters crowded the 230 Fifth Avenue rooftop bar and braved overcast skies and dehydration as they cheered for their exiled competitive eating champion.

Kobayashi says he is banned from the Nathan's event due to a two year old contract dispute with Major League Eating which oversees the Nathan's annual event.  A clause in the contract stipulates Kobayashi cannot appear in certain eating competitions and the league would control his endorsements. 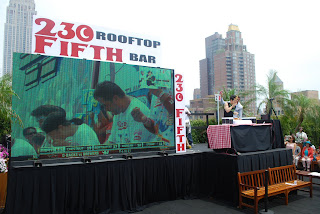 Last year in protest, Kobayashi was arrested at the Nathan's event after he climbed over a barrier and stormed the stage of the Nathan's contest. He spent time in a New York City jail.

"He [Kobayashi] is a cross between an athlete and a performer," said Greenberg.  "It's entertainment."

Greenberg said Kobayashi was paid for his hot dog eating appearance, but said it wasn't an endorsement or promotional fee and wouldn't disclose the amount.

Today, Kobayashi stood alone on a stage with a table, which was measured to the exact competition height, and two members of the New York State Athletic Commission—former-boxers Tyrone "The Harlem Butcher" Jackson and Brian Adams—who acted as judges. 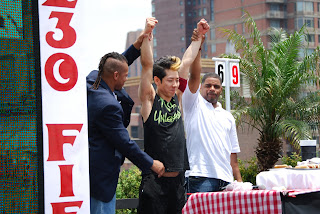 A timer rested on the table along with five large cups of water and a person to count the hot dogs devoured and flip a tally card. The huge TV screen to Kobayashi's right dwarfed the smallish eater with a huge appetite.  He never looked at the screen even once.

The pro-Kobayashi crowd cheered loudly as he jumped to any early lead over Chestnut.  It was 36-27 at about the half-way mark and the Japanese eater never slowed down before crushing Chestnut.  Sixty-nine barkers later, Kobayshi held the unofficial title once again.

There was some concern at the end of the contest when some credentialed "spies" for Nathan's said there was confusion and a miscount.  The discretion was cleared up when the flipper/counter explained that they didn't only count hot dogs individually eaten, but also by the tray.  Each tray held five hot dogs and there was four left.  It was a two-step counting system.

After sixty-nine hot dogs and 18 pounds of additional weight, Kobayashi, sporting a blond-streaked mane, leaped to the table after the record was announced.  He shook his fist in triumph and pulled up his tee-shirt, which read "Kobi Unleashed" and puffed out his belly.

"I'm so happy to break the record in front of everyone," he beamed.

Asked if it was harder to compete with no one standing next to him Kobayashi said through a translator, "I compete for myself, I was battling myself today."

In the past, MLE president Richard Shea said the league wouldn't recognize Kobayashi's achievement if he wins.  "It's a farce," said Shea.  "He's not banned, he's just mad he lost three years in a row."

Kobayashi claims he has no hard feelings for the MLE.  He just doesn't want to sign a contract that restricts him.

Kobayashi may not lay claim to Nathan's "Mustard Yellow Belt" like  Chestnut, but he did break his record in public.

I don't know if simulcasting competitions from different venues to the same event is feasible in most sports or a wave of the future, but it's too bad it couldn't set up the one-on-one match-up everyone wants — Pacquaio vs. Mayweather.

For now though, we'll settle for Kobayashi vs. Chestnut.
Posted by The Other Paper at 4:16 PM