Closing of OTBs is the end of a NYC era ... and culture

It looks like this could be the final stretch for a lot of the dreamers, schemers and a cultural stereotype in New York City if a last ditch rescue of the Off-Track Betting Corporation doesn't come through—and it looks like a long shot.

After a year of Chapter 9 bankruptcy, it appears the New York State Senate has failed to vote on a bailout package and will shut the doors on Friday. A last minute vote is the OTB's only chance of survival. Over a thousand employees of the legal bookmaking joints are bracing for the impact of the closings. 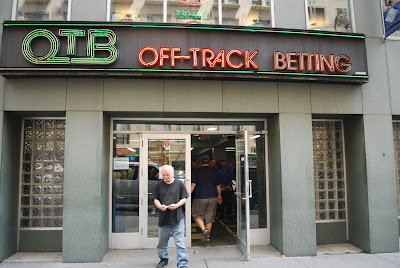 OTB has run this sloppy track before.  Since 2008—when the state took control—and as recently as last April, talks have swirled of shutting down the forty year-old old state-run betting parlors.  Analysts have called for privatization of the system as a way to rid the city of it's debt. It is currently short-changing the New York Racing Association $2 million a month and owes them over $25 million. OTB filed for bankruptcy exactly one year ago tomorrow and has been—like trans fat and salt portions—a sore spot with Mayor Bloomberg for years.

OTB's CEO, Greg Rayburn, said OTB is "prepared for the shutdown, if it's necessary...and [he] would continue to talk to people in the Senate and explain to them what the provisions are in the bill."  Rayburn—who pulls in $125,000 a month—said he would "urge them to come and act before Friday, because, realistically, once you close, you close."

The pending plan is to design a new business model with concessions by unions and management in an effort to modernize and lower expenses. Hmm ... maybe Rayburn could start with his salary.

The New York City institution once had parlors in every neighborhood and catered to die-hard railbirds, senior citizens and a wide array of characters who couldn't make it out to Belmont or Aquaduct. Just plunk down a talent agent and every OTB could pass for a Central Casting office. Where will where these New York City extras play the ponies, loiter and socialize after the windows are permanently closed?

Even the adventurous and curious, who didn't know a furlong from a filly, learned how to parlay and pick a trifecta under the fluorescent glow of a ticket-strewn linoleum floor. There were the frat boys and yuppies, with fat bankrolls and loud talk, who strolled in before their Triple Crown parties—and were about as welcome to the old ticket-rippers as Julian Assange is to a White House dinner.

Now, only a dozen or so of the once ubiquitous hangouts remain scattered about the boroughs. Old timers—who think Facebook is the 5-2 favorite at the Meadowlands—blame the decline in OTB attraction on everything from computer games and Internet wagering to a new generation raised on televised football and basketball. Native New Yorkers, who grew up with OTBs, just blame it on more lousy government involvement and believe it should have been sold to a private corporation years ago. Others cried slot machines were the OTB's only salvation and now it is too late.

It's reasonable to suggest that this race between the frisky Senate and the has-been OTB was over before they hit the gates. There was never going to be a neck-and-neck finish down the stretch. Even though one thousand jobs and a way of life in New York City are on the line, it's looks like they're going to put the old nag out of her misery.

No Seabiscuit story here.
Posted by The Other Paper at 6:24 PM