On Sunday, under the night lights of a Hell's Kitchen park in New York City, Middlebury College defended it's title in the fourth Quidditch World Cup by defeating Tufts University 100-20.  In a sport where the the most prominent pieces of equipment are brooms, it seemed only fitting for Middlebury to sweep seven games over a two day span to win the magical title. 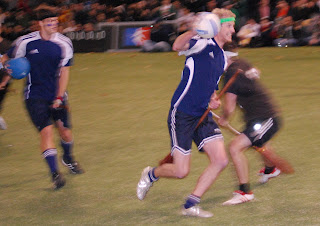 The whimsical sport, made popular by the beloved series of Harry Potter books and movies, was played by 40 participating high school and college teams in DeWitt Clinton Park on the west side of Manhattan.  Teams from schools like Yale, NYU, St. Lawrence, U Mass and Pittsburgh entertained a few thousand fans who filled the park for two days.

The weekend's festivities came right before next weekend's release of Part 1 of the the final chapter "Harry Potter and the Deathly Hallows."

The complicated game mixes a combination of dodgeball, basketball, soccer and a light touch of rugby into a fast moving sport. Players pass a ball and toss it through one of the opponent's three hoops to score ten points—all while holding a small broom between their legs. In the books, contestants actually fly like witches. If you can get past the initial sight of young adults hopping around with broom sticks between their legs, it actually looks like a really fun game and it's a lot more physical than that other broom sport—curling. 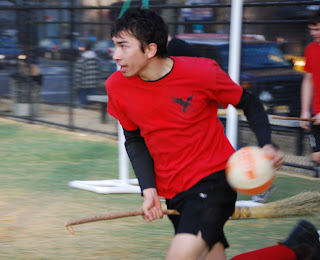 The co-ed teams play for about 20 minutes and the action is fast and rough.  The first aid tent was treating a lot of scraped knees and elbows, but an EMT said there were a few iced sprains too.

Teams with names like the "Violet Hipster Horcruxes" and the "Butterbeer Broooers" field 7 players from a roster of 20.  Headbands are mandatory. The game features player positions like "seekers', "beaters," and "keepers" who try and grab the "snitch"—a small purple sock in the waistband of a neutral player dressed in bright gold.  The snitch runner is probably the best athlete on the field because he is constantly running away from his pursuers or wrestling with them on the ground. The snitch whizzes around the 30x 40 meter field like a hyped up canary after a couple of Four Lokos.

Even for someone unfamiliar with J.K. Rowlings' fantastically popular books about the young wizard, and doesn't know a Muggle from a huddle or thinks Quidditch is a specialty sub at Quizno's, the game still has appeal.  There are currently over 500 college and 300 high school teams in leagues all over the country, so it's getting attention.

Middlebury College, where the real life version of Quidditch originated in 2005, is like the New York Yankees of the game. They are big and fast and were heavy favorites going into Sunday's game. Kate Olen, a returning chaser on last year's championship team was optimistic but cautious before the title game. "Tufts has a good finesse game," she said, "But this is the first time we ever played them, so we'll find out." Peyton Manning couldn't have been more diplomatic. 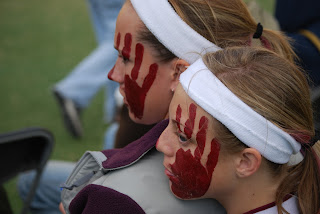 Even with the growing popularity of Quidditch, it's nice to see the simplicity of it hang on.  From the trophies constructed of gold and silver painted paper plates and cups to the hula hoops held onto poles with duct tape, everything rings backyard fun.  Even the out-of-the-box remarks from the game announcer over the loudspeakers—a snide reference to computer software or a nod to liberal politics (Well...just look at the schools)—and pop-culture exclamations about a rough play over the loudspeaker are erudite. "They (the players) are like extras in a Jackie Chan movie!" is just one verse of his colorful commentary.

The ever-growing event manages to stay as innocent as most of the youthful characters at Hogwarts.  No drug testing here and no Cam Newtons either.  They even have their version of the Heisman, the "Mansnel Award" for good sportsmanship.

I have seen the future sports star and he or she wears a headband and carries a small straw broom.  Most of the the sport's fans have top SAT scores and MBA's in their futures—even though they yell gibberish like "Get the Snitch" from the stands or razz players who get yellow or red penalty cards and are "sent to the hoops."

Maybe in the future, when either a bored Harvard or Yale genius is kicking around some crazy idea to advance the game, those brooms will actually fly.
Posted by The Other Paper at 11:07 PM