The weather at Super Bowl XLV in Dallas must have the NFL wondering how many helmet-to-helmet hits they took after they awarded the 2014 Super Bowl game to New Jersey/New York.  All these airport closings and frozen roads.  Where is this?  Chicago?

If all the forecasts are correct, this Sunday in New York--the night of the big game in three years--will bring snow and icy rain to New Meadowlands Stadium with temperatures dropping to 20 degrees.  Don't forget the wind chills which sweep across the swamplands.  Perfect for football purists, hell for everyone else.

Right now, the temperature over/under for Super Bowl XLVIII in NJ/NY is 32.5 degrees and snow comes in at 5-to-1 odds.  Global warming is the handicap.  There isn't a retractable roof.

Bad weather aside, it's the pomp and promotion leading up to the game that should really keep people away.  Here are a few of the things to look forward to that could make Super Bowl XLVIII the best ever.  One can only wish. 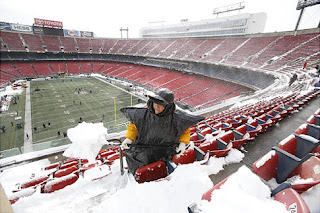 Hey, if Ricky Gervais can get a third shot at the Golden Globes, why not a second shot for an uncovered stadium in a cold-weather city?  Hear that Pittsburgh and Green Bay?
Posted by The Other Paper at 11:45 AM