The Fighter is a Lonely Hunter 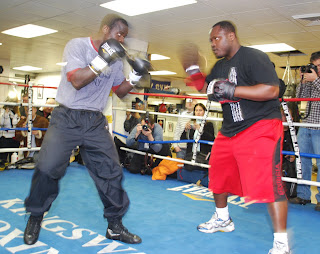 Pop! Pop! Silence. Pop, pop! A man's feet shuffle to his left on the blue, blood speckled canvas. Pop! Pop! Sixteen ounce gloves slap the padded hands of his handler accompanied by low grunts. The 30-second bell beeps. The fighter weaves and ducks under the slow, sweeping pad of the trainer. Dozens of cameras capture the action through the ropes. Reporters and analysts stare at the fighter--inspecting him like he was a prize dairy cow at a farm auction. Two more pops. Multiple dings emphatically signal the end of the round. Joshua Clottey drops his gloves and heads to the red corner. He curses about something under his breath--a mis-fired punch, maybe? No one at ringside could tell. He looked sharp, sounded sharp. "Take it easy," the manager, Vincent Scolpino, quietly urges. Clottey's face tightens. Clottey is a man on a mission--he is fighting the World Welterweight Champion in eight days. He has something to prove.

Clottey's skin is beaded with sweat. The manager squirts water into Clottey's mouth and towels the perspiration from his face. Nothing is said. Clottey breaks away and paces the ring. Camera flashes burst and Clottey has the presence of mind to give everyone surrounding the ring a frontal shot. He doesn't smile or frown. His sweatpants and three layers of tee-shirts are soaked through. There is nothing flashy or phony about about this 32 year-old fighter who has 38 pro bouts under his belt--including a world championship. 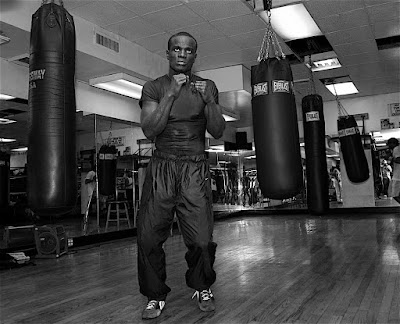 What drives a man to step into the ring--millions of dollars now--but what compels him to step into for the first time? Respect, vengeance or maybe necessity? Joshua Clottey's story begins as a member of the "Ga" tribe in Accra,Ghana. The streets (or dirt roads) of Ghana have produced top-ranked boxers like Azumah Nelson and Ike Quartey. They trained in Bukom and that's where Clottey laced up his first gloves. Ghanian fighters are known to fight in a patient, methodical manner, knowing how and when to attack. Clottey epitomizes this style and says,"Ghanians are by nature, proud and polite. They perform their tasks neatly, down to woman carrying a car battery on her head." Don't let this analogy fool you. Clottey has an agressive style and good movement. He is strong, has punching power, and can wear you down in the late rounds.

Clottey's opponent is Manny Pacquiao, 31, of the Philippines, widely considered the best 'pound for pound' boxer in the world. The Boxing Writer's Association of America recently called Pacquiao the 'Fighter of the Decade, 2000-2009.' Not bad credentials considering that Bernard Hopkins and Floyd Mayweather Jr. come from that same era.

Clottey may be concentrating on Pacquiao now but, possibly, in the back of his head is his fight with Miguel Cotto last June at Madison Square Garden. Many felt that the Puerto Rican, Cotto, won a favorable home crowd split decision against Clottey by hanging on for the final three rounds, which were pretty much dominated by the Ghanian. Clottey, now a Bronx resident, was on the cusp of superstardom in the fight world. Now he is only known as a good fighter. If that match was still on his mind, Clottey didn't show it while running on the treadmill. Clottey, surrounded by cameras and tape recorders at Kingsway Gym in mid-town Manhattan, ran at a steady gait and gave curt answers. "It's past," and "I'm fine," he answered reporters in his African accent. Still, he never cracked a smile or a pained face. "Done," was all he said as he hopped off the treadmill and got laced up by his trainers. No posse, loud music or theatrics. Clottey's small team is all business.

Is it respect that Clottey seeks? Maybe it is vengeance or necessity. It's hard to know. Joshua Clottey is a pro. He is also a heavy underdog in Dallas on March 13. A long shot maybe, but could that be what drives him? For the next 8 days the media's glare will surround him in a sport that is yearning right now to secure big name bouts. Boxing needs this fight. Clottey needs this fight. Even with the spotlight on 'The Event", boxing is still a one on one sport. No ball, no bat, no racket and no teammates--just two single men on a canvas floor. Forty thousand people will be in Cowboys Stadium and millions will be watching worldwide, still, Clottey will be hunting alone-- one man in the loneliest sport.
Posted by The Other Paper at 3:54 PM