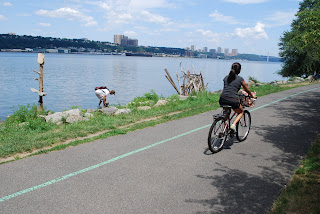 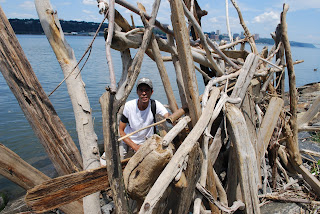 Upper Westsiders have been noticing the whimsical art for a long time — maybe years. Bikers and runners on the riverside path can't help but stare at the ever-changing piles of driftwood with the occasional plastic or metal accessory stacked up every twenty feet or so apart. Car drivers stuck in rush hour hell can even see the odd folk art along the West Side Highway. It helps break up the monotony of a long jog or boring commute. Dozens of these sculptures appear out of nowhere north of the 79th Street boat basin and disappear before crossing 110th Street.

Like wood cairns popping up out of nowhere, these displays line the east shore of the Hudson River. Some are simple, maybe a couple of small pieces of driftwood, to the elaborate jigsaw of a hundred sun-bleached branches and trestles which form small fortresses. Most of 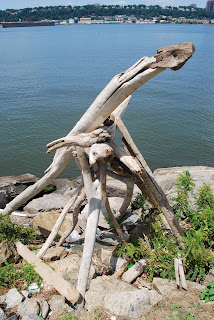 the sculptures look like giant eagle's nests or life-sized wooden figures waving to the sailors toiling on the endless procession of river barges. Other pieces need a little more interpretation. Maybe they resemble a tiny wooden Stonehenge or the stick man of Blair Witch to some of recreational boaters. "They are fun," exclaimed a fan named Mary. "Haunting," comments her friend, Andrea. Both agree that they like the stick monuments and, like anyone else who has seen them, wonder why and who would spend time building these temporary exhibits rising up for a mile and a half along the banks of the Hudson.

For years I peddled up Riverside Park to the George Washington Bridge on my bike—even when the path was an obstacle course of muddy patches, stairs and ventures onto Riverside Drive, not the smooth paved path it is today. The funny looking bundles of river wood were always there--always changing. The maze of crooked branches and driftwood made me smile. They were a wonderful mystery until I met the single-named creator—Alvaro.

Alvaro, who lives in Manhattan, and rides his bike to the river weekdays around noon to scavenge among the rocks for his building materials. Alvaro explained that he has been doing this since spring and has taken up where the "unknown old man" who started it, stopped. The unassuming artist doesn't delve into his personal life except to say he's of Italian descent by way of Columbia. He has been in New York for 22 years and proudly states that he is a stained-glass artisan by trade. The tanned Alvaro claims his Italian heritage draws him down to the river to "create and do something artistic." The Hudson River Greenway is his art gallery.

Wandering on the craggy river shore, between casting fisherman, and lazing street people, Alvaro picks through the bottles, paper wrappers, old diapers and "Coney Island Codfish"— otherwise known as used condoms. Alvaro doesn't specify what makes a good piece of building material. He doesn't seem too particular, but he does pick and choose. Maybe it is the crook of a branch or the width of a stump? Maybe it's the right bow of a small tree that completes a previously unfinished piece? Only the soft-spoken artist knows.

The sculptures usually have a short life. They have no names or titles. They are never the same and like a child's sandcastle swept away by the tide, Alvaro's creations meet a similar fate—only to wind and vandals. The northern gusts of the Hudson can topple some of the lighter stacks, but the real culprits are kids and "one bitter, old homeless man who has something against my work," claims Alvaro. He doesn't know who his nemesis is, but has spotted him vandalizing his work. Alvaro doesn't come to the river on weekends, so that's when the packs of destructive teens usually break up his displays. Each Monday, the artist starts gathering his wood, finds a new spot and starts building his happy parade of formations again.

I don't know how long Alvaro will keep crafting his temporary driftwood curiosities. The river will continue to yield an unending supply of material and inspiration and—in a city full of franchise chain stores, loud pop culture and fake celebrity—Alvaro's vision and anonymity help give New York City back some of its quiet incantation. I know the quirky little structures in Alvaro's free art show can make anyone's journey up or down the Hudson shore a little more enjoyable. See it for yourself.