THE 2010 NAUTICA NYC TRIATHLON
It's a Sunday morning at 99th Street alongside the Hudson River and with the sun barely peaking over the skyline, over 3,000 colorful, rubber-capped athletes line the riverbank and get ready to take a plunge. The temperature is already over 80 degrees, so a dive into the murky water will be more of a welcome relief than a shock to the system. 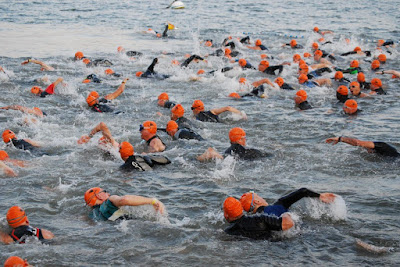 Welcome to the start of the 2010 Nautica NYC Triathlon—the only Olympic-distance triathlon event in New York. Won this year by Filip Ospaly of the Czech Republic—the field included participants from 44 states and 23 countries. People from all walks of life including men and women pros, first-timers and a record number (over 70) of para-triathletes competing in conjunction with the Accenture USA Para-Triathlon National Championship.

YOU WOULDN'T KNOW THEIR FACES

In a world of entitled and wealthy sports "heros", triathletes are an anomaly. The $30,000 in prize money is called chump change in the NFL and NBA and it is basically pro-sports minimum wage considering all the hours a triathlete puts into training. 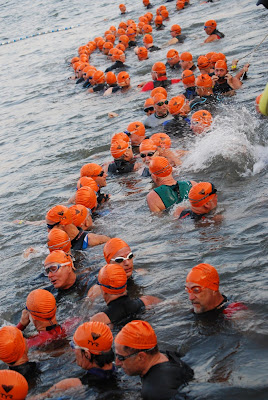 Today everyone will be challenged by the heat, humidity and soupy air of Manhattan. The thousands of enthusiastic supporters and rubber-neckers lining the Hudson, West Side Highway, city streets and paths of Central Park will push the athletes past limits some couldn't imagine. The heat will fell a dozen runners and one London man will end up in critical condition at New York Presbyterian. In 2008, Esteban Neira was pulled dead from the Hudson. "It's a tough day," said Race Director, Bill Burke, "its a pretty low considering what we expected." This is no leisurely jog around the park.

Such are the challenges of any athlete—especially these. There is a "Psych Station" at the starting tent, manned by psychologists who offer consultation for the jittery beginners and the occasional seasoned pro. Some competitors must overcome more adversity. There are inspiring stories all along the riverbank. War veterans missing limbs and people overcoming a multitude of traumatic emotional and physical set backs. This year's women's division winner---repeat champion—Rebeccah Wassner, was followed two minutes later, into second place, by her twin sister, Laurel. Laurel is a cancer survivor. "One-arm Willie" Stewert was one of 12 National Champions crowned in the Challenged Division. This race is the only qualifying event for the ParaTriathlon World Championships. To qualify, competitors must finish in less than 4 hours.

I met one 33 year-old man, Rajesh Durbal, from Orlando. He started participating in the combination 1.5K swim, 40K biking, and 10K run thirteen months ago. His best time is 3 hours and 5 minutes. Raj does this despite missing both legs from the knees down and part of his right arm at the elbow.

I first see Raj near the starting dock, relaxing, sitting under a tree with his prosthetic legs splayed wide. His smile is almost as bright as his spirit. He tells me, simply enough, he started this as a "challenge." Is that an understatement? He also mentions he is getting ready for the Ironman in Hawaii on October 9th. A man of few words and many goals. 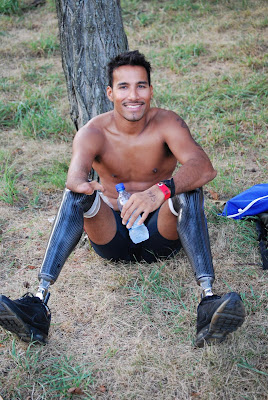 Rajesh's "handler" stands by the triathlete. He is an intricate part of Raj's day—as are other handlers for the many challenged athletes. He will carry the athlete on his shoulders from the swimming exit dock to the bike rack and, later, meet him to give him his running legs. These are the same type of carbon-filled prosthetics made famous by the South African sprinter, Oscar Pistorius, in 2008. The Cheetah Flex Foot, as they are called, make Rajesh stand about 6'6", although he needs no accessories to stand tall. 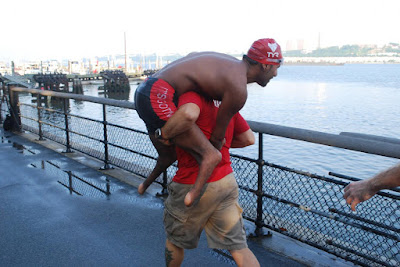 At the finish line, runners in all dimensions roll in. Some stagger while some speed up. Rajesh appears to welcoming cheers as he bounces through a finish-line ribbon. The 90-plus temperatures and steaming pavement haven't crushed him—physically or spiritually. "Did I break three hours?" are his first words. He's finished in the top-half of the field—an amazing feat of athletic ability. 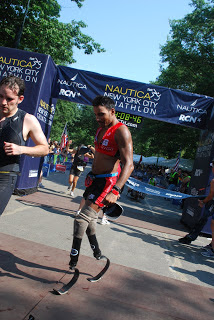 I only met Rajesh Durbal briefly. There are a lot more questions I would have liked to ask, but it was his moment. He did tell me the hardest part of the day was the biking. Well it was only 40K, my man—and, oh yeah, you did break three hours. Best of luck in Hawaii.
Posted by The Other Paper at 8:01 AM